BCRFM is a not-for-profit community radio station to serve Ballina and its outskirts.

Broadcasting live online every Saturday & Sunday from 9:30 am until 11 pm.

The Sunday Morning Show brings you the very best in music and chat to kick off your day. As today is Father's Day, I will be sharing my top 10 best or bad Dad jokes. Live from 9:30 am it would be rude not to!

Discussions hosted by the director of the Ballina Men’s Shed, highlighting current projects and interviewing participants.

Conversation Across the Table

The Show where we chat about anything (well almost anything!).

Going Coastal is a podcast for Not Bad in which we ask west coast artists to talk us through some of their favourite songs. This week our host is Galway artist Tracy Bruen, organiser of the long-running Roisin Dubh Open Mic and a successful recording and performing artist in her own right. Her episode features west coast artists Touché, Niamh Regan, and Jack Lee as well as some of the artists that have influenced Tracy’s own work such as Fiona Apple, Kate Bush, and The Divine Comedy. Galway musician and multi-instrumentalist Tracy Bruen writes music that seamlessly blends and bends the genres of folk, prog, pop, and indie. Her music is crafted around her spellbinding vocals, stories, and theatrical flair. She has played many of Ireland’s major music festivals, including Electric Picnic, Body and Soul, Westport Festival, Galway International Arts Festival, Cúirt International Festival of Literature and Sunflower Fest, and many well-known venues across Ireland, the UK, Switzerland, Czech Republic, and Germany. “A voice of husky, whispery, and sky-reaching heights is unapologetically Kate Bush-like and the blend of hill-walking candle-lit voyaging and blues guitar make it both timeless and fitting with the current music trend.” We Plug Good Music “With a stunning vocal range and a theatrical bent, multi-instrumentalist Tracy Bruen blends indie folk with wistful blues to tug the heartstrings and inspire the mind. Let her rich and intriguing melodies take you away on a wave of sound and soul that is as original as it is lyrical.” Electric Picnic Official Brochure, Top Picks, 2014 Songs from her debut album, Mirror released in June 2017, have been featured on regional and national radio stations. “a spellbinding blend of indie, folk, prog, country, and roots, topped off by her powerful, and varied, vocal abilities…her honesty and vulnerability create something quite moving”, Kernan Andrews, The Galway Advertiser Follow Tracy on Facebook, Twitter, and Instagram.

On this episode, I'm talking about some of the movies I've seen recently, as well as the rubbish weather and wondering if it's suitable to walk about in a wetsuit or a zorbing ball
With thanks to Mayo North for sponsoring the show. Learn more

These weeks show features music from Albums released fifty years ago, 1970. A year considered by many to be one of the greatest in music history. There's music from The Beatles, The Doors, Van Morrison and much more. Tune in Sunday from 4 to 5 on www.bcrfm.ie to hear the best folk and blues.
Learn more

Coming up on this week's Sunday Serenade. Shireen West will shine the spotlight on The Andrew Sisters, Dean Martin, Judy Garland, Luke Evans - plus a really special set with Frank Sinatra and Willie Nelson. Followed by the other stars of the day. Show kindly sponsored by Heffernan's Supermarket & P.O.

On this week’s show, I’ll be featuring music that is influenced and inspired by the great American poet Walt Whitman. You can expect to hear music from Vaughan Williams and Delius to Robin Williamson and Iggy Pop - and we might even hear from Walt himself. All this and much more besides - so why not listen in between 9 and 11 pm Sunday evening. Sponsored by Ballina Arts Centre.

A show hosted by Pat Boyle, well known for his love of country music. A very popular show each week as he champions local artists who may not be getting air play on other stations.

This Saturday, we'll celebrate US Independence Day with a special show. We have lots of great tracks lined up from US icons like Neil Diamond, Garth Brooks, and Broooce! We’ll have the Top American / Irish moments and an interview with Kimi Naidoo who is the former International Executive Director of Greenpeace International, Secretary General of Amnesty International, and the current Global Ambassador for Africans Rising for Justice, Peace & Dignity. As always Ciaran and Joe will bring you their Premier League predictions! Saturday from 1pm - 2pm.

Livin in Stereo is hosted by the fabulous Tara Rafter Today's show is about reflecting on the last few months. As always a great mix of tunes. Show kindly sponsored by Centre Stage Vocal Academy. 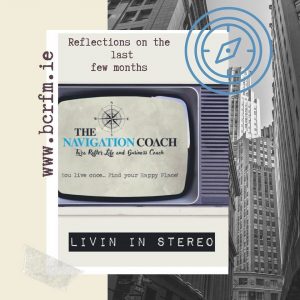 3 - 5 pm The Saturday Frequency with Matthew O'Hora. The latest news, gossip, and more. The best feel-good music from the 80s to now. The guess the classic year - music and few clues to help you guess the year. Just a little bit of fun for your Saturday afternoon.
Learn more

If you remember getting your pass in The Broken Jug for The Pulse, the cages in The Court, The Entrance, and the back bar in Longnecks this is the show for you! Tune in weekly to The Kitchen Disco and relive the summer hits from the '90s and early '00s plus some classics when we wore jelly sandals in the '80s.

Songs from the Irish Singles Chart presented by Declan Tolan. This weeks playlist has music from Candy Paint from Post Malone, In this City. Iglu & Hartly Stereo Love. Edward Maya Darkest Ocean. All-time '80s classic Faith by George Micheal. Getting you in the mood for your Saturday night.

Hosted by the human rock encyclopedia that is Joe Hennigan covering all things Rock Music from A to ZZ Top. You'll hear tracks from new album releases, the featured album and the best of 80's, 90's rock. On tonight's show, the featured album comes from Dutch rockers Vandenberg. Formed back in the 80s they're back with a new line up and a new album "2020".

Into the Night is two hours jam-packed with a hotch potch of musical genres — everything from americana to rock to blues to soul to world music and to much more but the one common denominator is that it’s music of the highest quality to keep you company every Saturday night.   Show kindly sponsored by Callan Tansey Solicitors, Ballina.